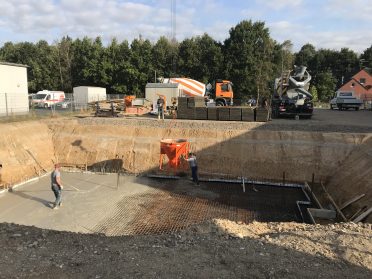 Just a few meters away from our at Leopold-Hoesch Street 6-8, a new building for GWS Tech has been being built since the beginning of September. In addition to a 400m ² hall for workshop and warehouse, 240m ² of space for offices, a meeting room, lounge, social facilities and 120m ² of basement for servers, archives, house technology and a large training room are currently being built there.
As early as 2015, the planning for the new building began and so everyone was happy that it was finally possible to start in September this year. A happy coincidence was that in the immediate vicinity of our current headquarters there was still a plot of land that could be purchased.
Until now, the hole for the basement has already been excavated and the basement has been poured from waterproof concrete. The floor for the construction of the hall was also replaced and compressed. In the next few weeks it will continue above ground, so that the hall can probably be used for storage as early as the beginning of 2019. The office complex will then follow as planned in the summer of 2019. Then GWS Tech colleagues will move in there.